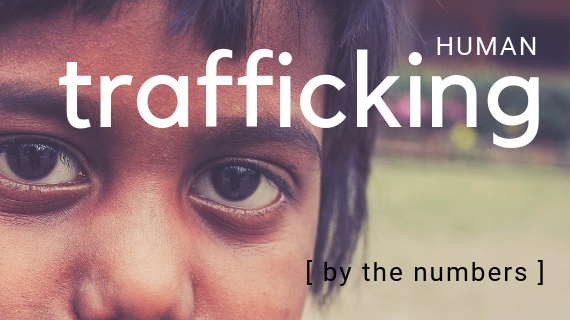 Human Trafficking by the Numbers

Chances are, you’ve heard some of the sobering reports on human trafficking worldwide.

But as troubling as the issue is, it can be hard for the reality to sink in – especially for those of us who don’t see the effects of trafficking directly and, instead, encounter the issue through the seemingly far-away stories we hear about it. That’s why being educated is key. The numbers can help us gain some perspective.

According to The International Labour Organization, there are approximately 40.3 million victims of human trafficking globally.

For a sense of scale, that’s well over the size of California’s population. Of these millions of victims, 25 percent are children, 75 percent are female, and 81 percent are trapped in some form of forced labor.

The 24.9 million people exploited for forced labor includes those caught in one of the most common forms of trafficking: sex trafficking. Women and girls are overwhelmingly affected by exploitation of this sort, making up 99 percent of victims in the commercial sex industry. Other victims of forced labor work in construction,  agriculture, or domestic work. While human trafficking affects victims of all ages, children are especially vulnerable. About one out of seven endangered runaways reported to the National Center for Missing and Exploited Children in 2017 were likely child sex trafficking victims. Of the 15.4 million victims forced into marriage worldwide, 37 percent are children.

While people and organizations across the globe are taking action to fight human trafficking, there is still an enormous amount of work left to be done.

According to the Department of Defense, human trafficking is the world’s fastest growing crime. Sex trafficking alone generates an estimated $99 million per year. Of those who fall victim to trafficking, only one percent are rescued. For this reason, prevention is absolutely crucial.

Because the issue of human trafficking is so widespread and complex, Forgotten Children Worldwide takes a nuanced approach in addressing the different needs of endangered children all over the globe. And we need YOU to make this happen. You can fund the building of orphan homes where children are given the safe, loving home environment that is so necessary to their well-being and that is so difficult to provide at an overcrowded orphanage. You can sponsor a child. By funding self-sustainability and microfinance projects, you help people in poverty — especially women — to have a self-sustaining income and create a stable, safe life for their children as a result. You can provide the resources needed for aftercare services to help trafficked children cope with trauma. You can change a life.

As discouraging as the facts and figures are, we hope they will serve as an impetus to you to take action. By supporting these forgotten children in Africa and Asia you are joining the fight for justice worldwide.

What I Learned from Leroy »