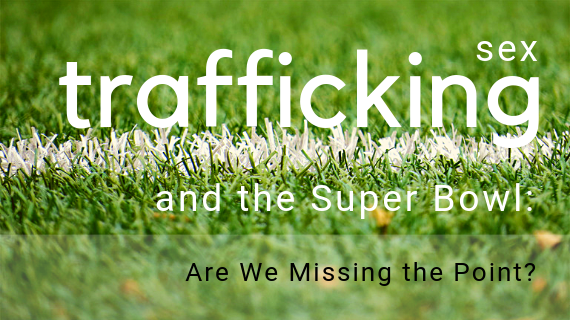 Sex Trafficking and the Super Bowl: Are We Missing the Point?

Media outlets have warned us for years about the Super Bowl’s dark side. Reports have told us that, with travelers flocking to a city for the big event, sex trafficking skyrockets in the area. But does it really work that way? Is the biggest football game of the year, and other events of the same magnitude, the true cause?

It would make sense if it was. With a city hosting thousands of fans from out of town, many of whom are staying in hotels and attending parties, the opportunities for exploitation abound. In terms of the Super Bowl increasing levels of concern, this year was no exception. Atlanta has one of the largest underground commercial sex industries among U.S. cities. Local authorities and activists were on high alert, and with good reason. However, while increased efforts to prevent trafficking is of course a crucial step toward eradicating it, the public’s understanding of the Super Bowl’s influence is not immune to misinformation and misunderstanding.

While some groups have claimed that the Super Bowl causes an increase in sex trafficking, leading anti-trafficking organizations Polaris and the International Human Trafficking Institute (IHTI) say that no evidence supports this claim, according to CNN. They affirm, rather, that trafficking is a year-round, country-wide phenomenon. The National Human Trafficking Hotline does see “slight upticks” in calls and reports during the Super Bowl, but according to Polaris Spokesperson Brandon Bouchard, those higher numbers are likely the result of the hotline being better advertised in the time surrounding the game. Arrests are higher during the game as well, but likely due to the fact that police put greater effort into surveillance. Odds are, a victim trafficked during the Super Bowl was already being trafficked beforehand.

In a statement IHTI published before this year’s Super Bowl, the group wrote, “there is a widespread myth that the Super Bowl is a catalyst for the largest human trafficking event of the year, when in fact, human trafficking occurs daily in response to the market demand of customers who want to buy persons for labor or sexual exploitation.” Likewise, a study by Arizona State University focused on the 2014 Super Bowl found no causal relationship between the event and sex trafficking in the area. Instead, the authors suggested strengthening efforts to prevent and eradicate sex trafficking not just within the time frame and locale of a big event, but at all times and across the whole county.

This does not mean, of course, that the increase in activism leading up to the Super Bowl is entirely misplaced. This year, Atlanta Mayor Keisha Lance Bottoms told CNN, “The Super Bowl is an opportunity for us to talk about it, but it’s something we have to be vigilant about 12 months out of the year.” Dismissing the fact that human trafficking is a daily phenomenon in order to focus solely on Super Bowl Sunday can be dangerous. According to NBC, motorcycle conventions and business conferences, for example, have been bigger hubs of trafficking than the Super Bowl. Still, they receive far less attention.

Of course, human trafficking is an issue beyond the United States. According to The International Labour Organization, there are approximately 40.3 million victims of human trafficking globally. Crises surrounding big events overseas are often less publicized than those happening on our home turf. Ahead of the 2018 World Cup in Russia, traffickers took advantage of the country’s relaxed entry rules to smuggle trafficked children across the border. Ten Nigerian children, for example, were intercepted before boarding a plane for Moscow, each of them carrying a FIFA Fan ID. As early as March 2016, BBC reported the use of forced labor to construct a stadium for the 2022 World Cup in Qatar. The injustices are occuring at this very moment. This makes our mission at Forgotten Children Worldwide feel all the more urgent.

Though it may not be our one and only concern, the exposure created by the Super Bowl and other big events has the nation listening. It has inspired increased efforts to fight human trafficking that have been extremely effective. In other words, the Super Bowl has shown us the impact we can have when we rally together to fight exploitation. We have people’s attention. Now it’s time to redirect it.

Malaria: The End Is in Sight »